Hi! I hope everyone is well.

I am new to learning Spanish, I have been studying this language for about a month and it is still not going as well as I would like. For this reason, I have been looking for apps and online tools to improve, I found a very interesting game, it is called Langlandia and it has helped me concerning my vocabulary and pronunciation, the game gave me one of the tests a question that confused and me I would love a clear explanation about the use of: those, those, these and these.

This type of terminology always confuses me and in addition to helping me with my progress, they would be helping me to earn points in Langlandia and allow me to unlock more advanced aspects of the language.

Thanks for reading and I hope you can explain the use of those articles to me. 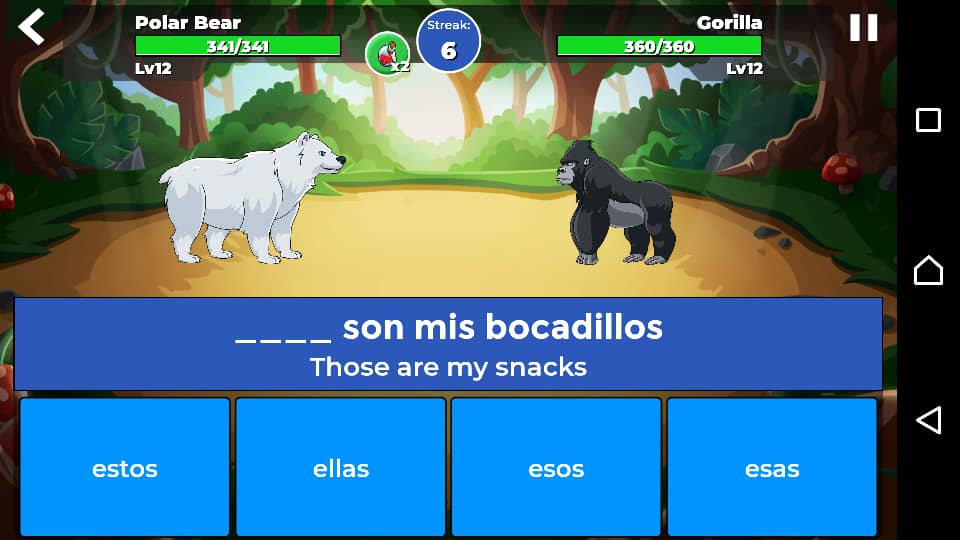 In English there are two series of demonstratives:

In Spanish, in contrast, there are three series:

The "este" series is used for objects that are close to the speaker:

In general there is a bit of association between yo/nosotros and "este" on the one hand and tú/ustedes and "ese" on the other. This is far from a general rule because it is the distance that is important and there are other associations at play.

For example, in the display you show, I think your app wants you to choose "estos" because it is "mis bocadillos".

Again, notice that in practice this is not necessarily true. For example, if I'm sitting on a chair and find out that my coat is hanging from my friend's chair, not mine, I would tell my friend:

Because it is placed next to my friend, not to me.

This is by far the simpliest and clearest, and therefore the greatest explanation of this.

For years it kept being described as "those (over there)" ie much farther away. I of course could always recognize it and know what it mean, and when I used it myself it was always the right choice, but it was always obvious. I never had as clear and crisp an explanation -- until now.

I'm glad it helped! For completion, let me add that, together with their literal meaning, the different series may also have an emotional connotation.

In particular, the "ese" series may implay a certain contempt:

The "aquel" series may imply admiration:

Besides, in writing the "este" series refers to something that I'm about to talk about, whereas the "ese" series allludes to a topic that I have just mentioned. Not all writers adhere to this particular contrast but I do find it useful:

[Proceeds to mention what must be taken into account

[Writes about a topic]

A bonus! Thank you!