The Japanese Alphabet: A Beginner’s Guide

Learning the Japanese alphabet as a complete beginner can be a bit intimidating. Not only is it a whole new language, there are three different alphabets! While this may seem challenging at first, the good thing is that, when you take it in steps, it becomes much easier to master. The first of these steps right off the bat should be mastering hiragana, and this post will show you how.

Hiragana is the most basic of the three alphabets, and the foundation of the written Japanese language. It’s the first one children in Japan learn, just like we learn our ABCs. There are 46 characters, each representing a certain sound, and they are pretty simple in shape. If a little kid can pick it up, then so can you! Let’s learn a little more about how this alphabet works.

Though we call it an alphabet, if you want to get technical, hiragana is actually a phonetic syllabary. That means that unlike a conventional alphabet, in which each letter represents a specific individual sound in the form of consonants and vowels (a, b, c, etc.), a phonetic syllabary such as hiragana uses symbols which represents a whole syllable.

Below you can see how the LingQ reader makes hiragana easy to read. Here’s the lesson if you want to give it a try. 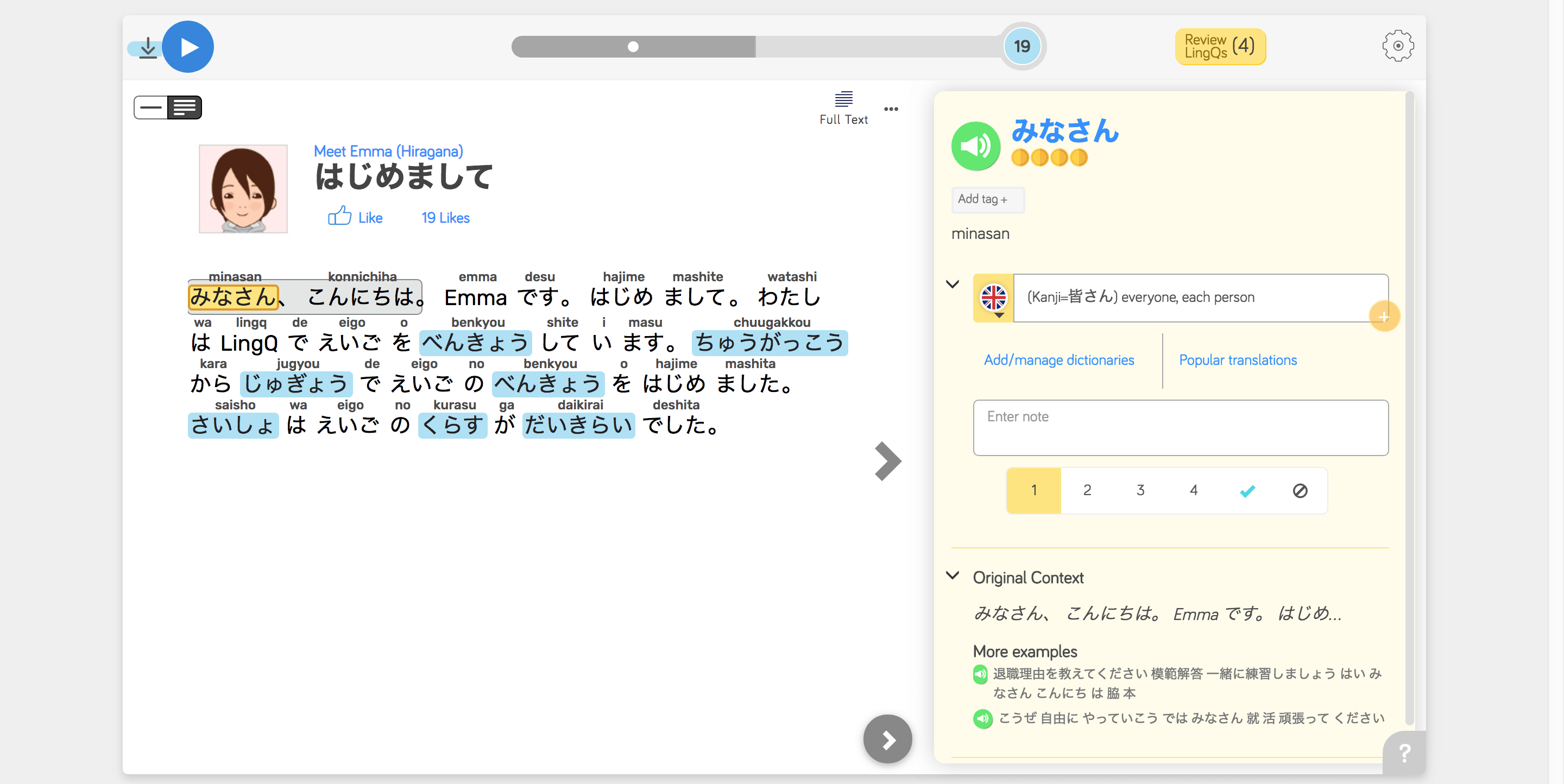 How Hiragana is Used

As the foundation of the Japanese written language, there are several important instances in which hiragana plays an important role:

Furigana is basically a pronunciation guide to difficult Japanese words, written as small hiragana characters above or beside kanji characters. Kanji are the complex Chinese characters that represent full words and are most commonly used in texts. If you can’t read kanji, there will most likely be furigana right there to help.

You can see furigana in lessons in the LingQ Japanese library too. 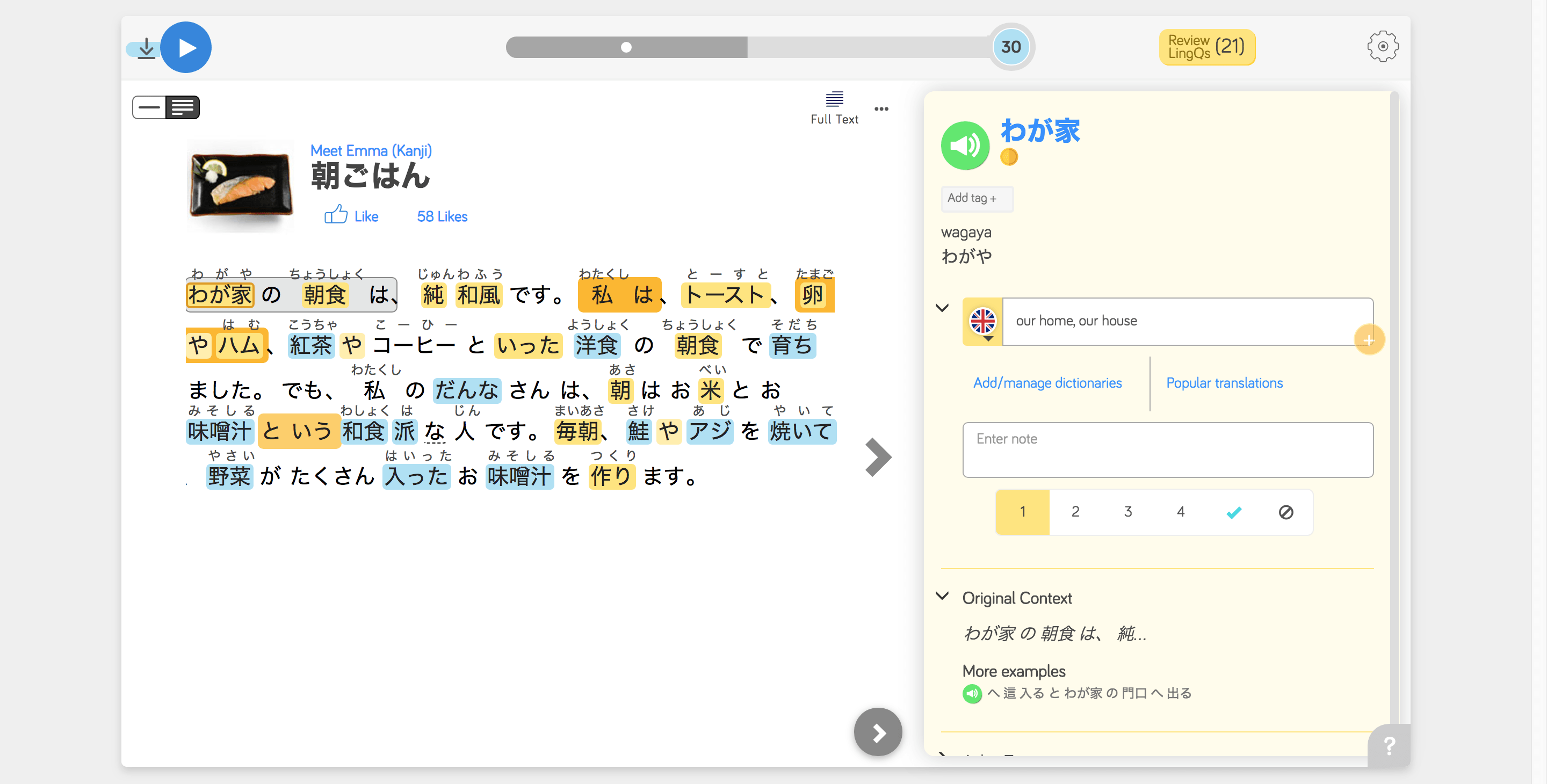 Particles are an important part of Japanese grammar. They are added at the end of a word and indicate whether it is a subject, object, or verb of a sentence. The most commonly seen are は (wa), が (ga), and を (wo). This is also important to understand the flow of written sentences since words are not separated by spaces. Particle placements and grammatical hiragana (below) are good indicators of where a word ends.

Polyglot Steve Kaufmann made a great video on Japanese particles for his YouTube channel.

Hiragana is also an important part of grammatical sentence structure. Because complete words are usually written in kanji characters, hiragana is used to indicate the grammatical role the word plays in the sentence, such as tense and participle. For example, 勉強 (ben’kyou) means ‘study’ in its noun form. The present tense ‘-ing’ form is written by adding している (shiteiru) to that noun, becoming 勉強している (ben’kyou shiteiru), or ‘studying.’

How to Learn Hiragana

The good news is, because the characters are so simple, it’s easy to learn in as little as a few days with proper practice and dedication. The first thing you will need is a good hiragana chart, which you can find pretty easily with a quick internet search. Begin by learning the vowel sounds, and then practice row by row, focusing on only one set at a time.

(But don’t try to cram them all at once, or you may get confused!)

English is made up of consonants and vowels. Hiragana is structured a little differently, where the characters are grouped in a table format according to the sounds they represent.

*The ん, or ‘N’ sound does not have a vowel associated with it. It is pronounced in the same way as the English ‘N.’

Now that we understand the structure of the table, lets learn more about the pronunciation!

How to Pronounce Hiragana Letters

As mentioned above, having a chart on hand and understanding the structure is extremely helpful to study from. But for the sake of this lesson, and to delve into the sounds more clearly with concrete examples, we are going to break it down into groups, followed by the closest example of an English word with the same pronunciation.

Please note that the English words may not necessary have the same spelling as the sound they represent. Just focus on the sound of the vowel in the word.

As you learn the rest of the letters, remember that they will all keep this same vowel pronunciation throughout the chart. There are no variables in sound when it comes to vowels. Once you can pronounce these, you can pronounce any character! Let’s move on to full syllables with consonant sounds now.

*Note: There is no ‘si’ sound in the Japanese alphabet

*Note: The ‘t’ in Japanese is not aspirated as in English. It sounds more like the ‘t’ in ‘caterpillar’ than in ‘taco.’

*Note: There is no ‘ti’ or ‘tu’ sound in the Japanese alphabet

*Note: There is no ‘hu’ sound, rather this letter is more like a mix between both ‘f’ and ‘h’. While in traditional Japanese it is closer to the ‘fu’ sound, it is also used for English words that begin with either sound, such as ‘hook’ and ‘football.’

*Note: There is no ‘yi,’ ‘yu,’ or ‘ye’ sound in the Japanese alphabet, they are only found in foreign words and indicated in katakana.

*を has the same exact pronunciation as お, and is only used as a particle. You will never see this letter used in a regular word, that is what お is for.

*Note: This is the only Japanese letter without a vowel sound in it. It sounds just like an English ‘n,’ but can sometimes sound like an ‘m’ in certain combinations.

A dakuon is a more strongly voiced sound that begins with the following syllables: k, s, t, and h.

Dakuon are indicated by two small strokes that look like a quotation mark in the upper right of the letter. These are not seen in the hiragana chart because they are based on the letters of the k, s, t, and h rows, and are formed by simply adding the indicator to the top right corner of that letter.

The voiced sounds are created from the base table in the following way:

*Note that the pronunciation of じ and ぢ (ji) are the same, while ず (zu) and づ (dzu) are very similar, with the z in dzu just sounding a little stronger.

*Note: There is no ‘zi’ sound in the Japanese alphabet

*Note: There is no ‘di’ sounds in the Japanese alphabet

Sounds Beginning with ‘B’

Handakuon is the ‘h’ row with a small circle added to the top right. It is pronounced as the ‘p’ sound.

There are many cases in which a small hiragana letter is used in combination with a regular letter to produce a sound that is not on the basic chart.

Yoon (pronounced yo-on) are combination sounds that use a normal hiragana letter followed by a small ‘ya,’ ‘yu,’ or ‘yo.’ When this small letter is used, it basically cancels out the vowel sound of the preceding hiragana, and combines only the consonant part of the sound with the following small letter.

Note that in these cases, the preceding larger hiragana is usually the ‘i’ form of the letter (ki, gi, ji), as mentioned above.

A sokuon is a stop between two syllables. This usually results in the syllable preceding the つ to carry greater emphasis.

I hope this lesson has opened your eyes to the world of hiragana, and the surprising ease at which you can learn it. Even though it may look like a lot at first, you will soon find that with the pattern of he sounds and simplicity of the strokes, it becomes quite simple.

Finding beginner content isn’t the easiest thing to do, luckily, LingQ comes equipped with courses that are great for beginners. These courses contain lessons that are in hiragana and allow you to look up words easily as well as listen to the lesson’s accompanying audio to give you a better understanding as to how words are pronounced. 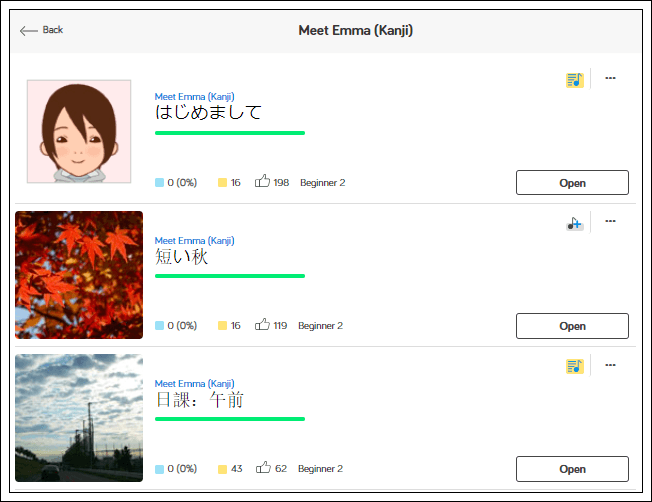 LingQ is also available on mobile, so you can take your lessons anywhere.

Hiragana can be learned fairly quickly, but it is up to you! Please make sure to dedicate some time to practice daily, including studying the chart, practicing writing with practice sheets, and of course, reading aloud to practice both recognition and pronunciation. Once you’ve mastered hiragana, you’ll be able to move onto katakana and kanji. For more information on reading in Japanese, check out Learning to Read Japanese: A Quick Guide for Beginners.

Krys is a Japanese-fluent, English native currently based in the US. A former Tokyo English teacher and translator for several Japanese companies, Krys now works full time as a freelance artist, writer and translator with a focus on subjects related to Japanese language and culture.

How to Speak Russian: A Step by Step Guide