Poland is the ninth largest country in Europe, composed of 940 cities, 23 national parks and countless open fields, lakes and mountains. A country that shares its stories through its Renaissance architecture and Romanesque churches, its centuries-old traditions and 15 World Heritage sites.

Poland has a population of almost 38 million people, it was invaded approximately 40 times, and adopted the first written constitution in Europe and the second in the world.

As you can see, it is almost impossible to describe a country vividly without using numbers and Poland is no exception.

It features the largest market square that spans across nine-and-a-half acres or 38,000 square meters of perfectly laid brick, lined with kamienice, otherwise known as historic brick townhouses, and is a home to Malbork – the largest castle in the world.

Poland has also always been big on traditions and that certainly has not changed till this day.  From celebrating name day, sharing wishes and wafers at Christmas, flooding the cemeteries with flowers on All Saints Day to consuming an astounding amount of donuts on Fat Thursday. How many donuts, you ask?

On average, a pole will eat two and a half (most likely rose-jam filled) donuts on the National Donut Day that falls six days before Ash Wednesday – although who are we kidding – most pączki devourings go unreported so that number may be much higher in reality. Unsurprisingly, there are numerous Polish songs about donuts, such as this hidden gem or this one.

Going back to numbers, they are incredibly useful not only to paint a picture or put things in perspective but as a basic communication tool as well – especially if you are considering to visit Poland. Thankfully, Polish numbers make sense and are easy to learn. Then again, that might not necessarily be true as I might just be biased as a Pole. Regardless, Polish numbers follow a certain (somewhat simple) pattern. Numbers 1 to 10 are unique and go like this:

How do they sound? Check out this catchy tune to find out.

To get a number above ten, all you do is add “naście” at the end.

So 11 would be jeden (one) + naście. Since this results in two letter n’s next to each other, they merge into one = jedenaście.

As none of the other numbers end with an “n”, you would just add the “naście” at the end (for the most part).

So for twelve, you would take two and naście thus giving you dwanaście. For thirteen, you take trzy + naście = trzynaście.

Whether you are learning Polish or a different language, getting yourself familiar with the alphabet and numbers is a great way to start your language-learning journey. However, no matter what language you are learning or considering to learn, it will always seem challenging in beginning. Based on my personal experience, the best way to learn is to be patient and make it as fun as possible through different resources and mediums, which will also encourage you to be consistent.

Polish numbers and much more on LingQ

Speaking of making language learning as fun as possible, LingQ allows you to study Polish using content you’re interested in. Stay motivated by learning the language, whether it be by studying Polish music or watching Polish YouTube channels, you can import almost anything into LingQ. LingQ will create interactive lessons using your content’s transcript and audio so you can easily read the vocabulary, listen to the audio, look up new words, and save them in one platform.

For example, if Polish rock is your thing, find the lyrics online and the audio, then import them into LingQ. Create your own interactive lesson, as shown below.

First, find the lyrics (I use Genius.com) and import them into LingQ. You can also upload audio as well so that you can listen and read the lyrics at the same time. 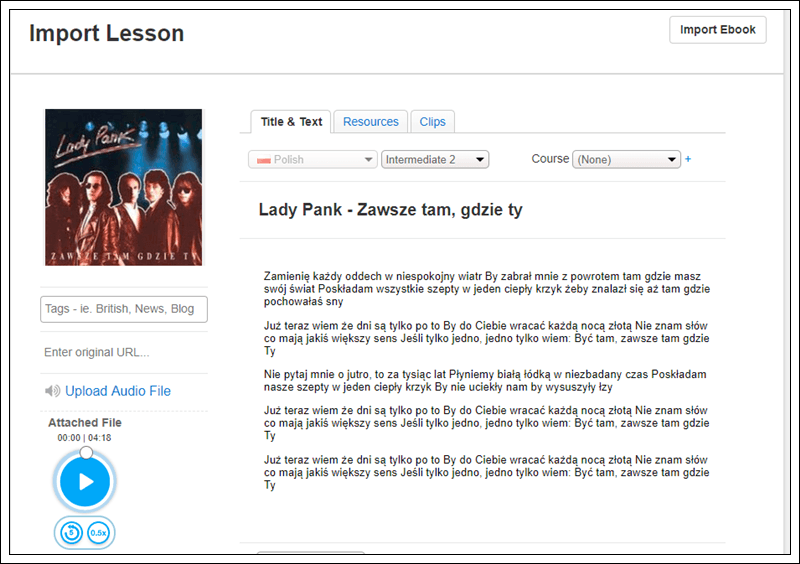 After you save and open your new lesson. It should look like this:

You can “LingQ” each new vocabulary word or sentence you come across by clicking it. LingQ will automatically save your new vocabulary and create flashcards so you can review them anytime.